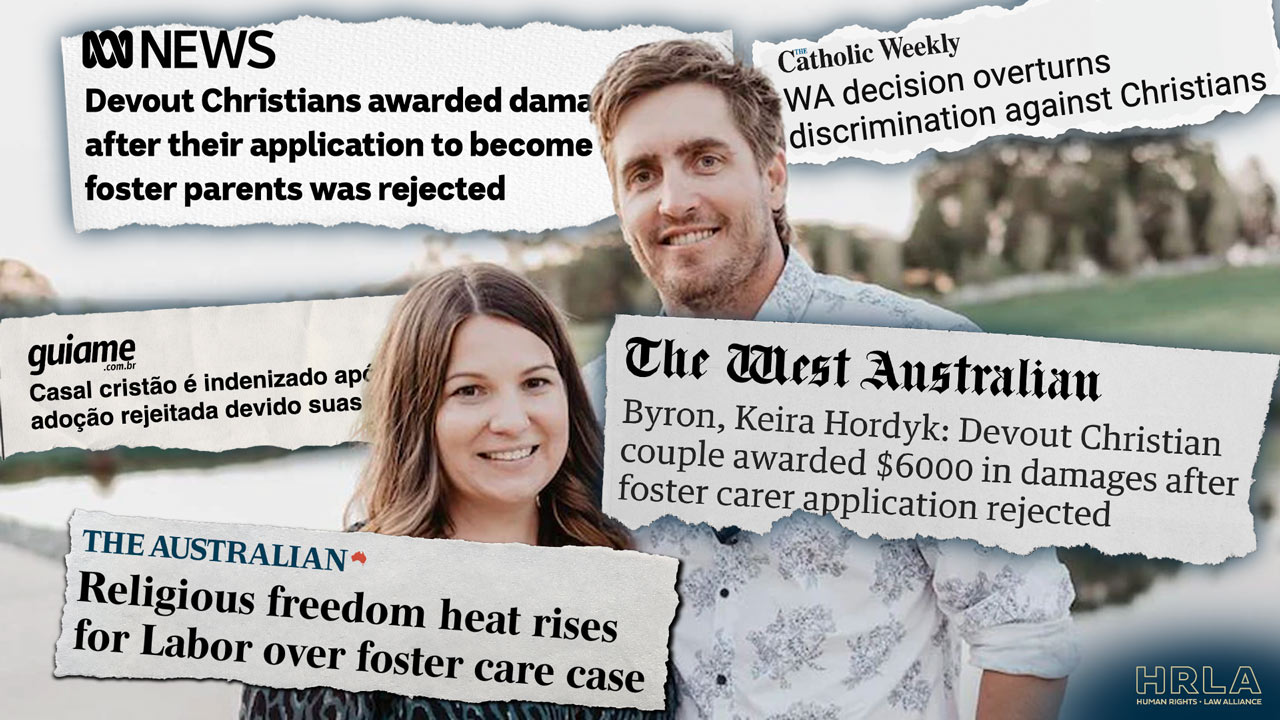 The recent case of West Australian Christian couple Byron and Keira Hordyk was a big win for religious freedom in Australia and generated headlines across the globe.

After foster care agency Wanslea Family Services rejected their application to become foster parents, the Human Rights Law Alliance took the case arguing they were the victims of unlawful discrimination.

The Tribunal decision released on 23 December 2022 confirmed that the foster care agency had discriminated against the Hordyks.

The win was groundbreaking for Australian religious freedom and the news spread quickly around the country despite the Christmas shutdown.

From The Australian, “The State Administrative Tribunal in WA found that Wanslea was providing a service and ‘indirectly discriminated against the Hordyks in the provision of that service on the ground of their religious conviction’.”

“A Western Australian tribunal has found a Christian couple were discriminated against when their application to foster a child was rejected over their view that homosexuality is a sin,” reported ABC News.

“Perth couple Byron and Keira Hordyk hope that their five-year religious discrimination battle against a foster care agency will give hope to all Christians who strive to live by and promote basic Christian beliefs and values,” wrote The Catholic Weekly.

It wasn’t just in Australia that the news made headlines. This important case was also reported to many around the world.

Portuguese Christian News site Guiame covered the story, writing “because they follow the biblical precepts and believe that homosexuality is a sin, an Australian couple had an adoption unjustly denied”.

“A Western Australian tribunal concluded that Byron and Keira Hordyk views on religion were discriminated against,” reported the UK’s Tyla.com.

The widespread interest in the outcome of this case shows that Australians care about their religious liberties. The Tribunal’s decision also demonstrates that the momentum of fashionable ideas demonstrated by the foster agency’s treatment of the Hordyks and other cases like the treatment of Andrew Thorburn are out of step with what is just and equitable under the law.

As John Steenhof, principal lawyer and head of the Hordyk’s legal team at the Human Rights Law Alliance, said, the Hordyks are “ordinary Australians” who were discriminated against.

“[The Hordyks] were treated badly purely because of their traditional Christian beliefs about sexuality,” he said.

“This is a wonderful couple who would be great foster carers and they were told that they were unsafe because they didn’t affirm homosexuality.”

The Hordyks’s case is groundbreaking for religious freedom law in Australia. the Tribunal followed the decision in Williamson, finding that it is not the court’s role to judge the ‘validity’ of a person’s belief by engaging in theological or doctrinal reasoning.

By following this important UK case, the Tribunal has recognised that the content and reasoning behind a person’s religious conviction should not be picked apart by a judge, who is not a theologian, and should only be concerned to make sure that the person genuinely and sincerely holds their belief.

This goes to the very heart of freedom of religion in a pluralist society. No one belief should be privileged by the State and every religious belief should be afforded equal protection under the law.

Australians should not have to fear that they will be discriminated against because of their sincerely held beliefs.