The year of our Lord two thousand and nineteen in Australia has so far been a fertile year for the public profile of the fundamental right of freedom of religion for Christians to manifest their beliefs. Whether it was the pre-Christmas attempted raid on Christian School freedoms in the Penny Wong Bill, the disappointing decision out of the High Court in the Clubb case about abortion “safe access” zones or the case of Israel Folau, never has religious freedom been so prominent in the general consciousness and culture of Australia. This is a time of both crisis and opportunity.

2019 has also been a providential time for the Human Rights Law Alliance to move into transition. As of March, Human Rights Law Alliance has incorporated as a not-for-profit law firm that is dedicated to helping Christians who experience discrimination because of their Christian beliefs. HRLA will specialise in legal cases and advisory involving freedom of speech, freedom of thought and freedom of conscience. Already, HRLA has been involved in over thirty matters, ranging from provision of quick advice to full representation in litigation matters. God’s timing is good timing. It is reminiscent of Esther 4:14 that HRLA has arrived “for such a time as this?”.

And these are critical times for religious freedom in Australia. I am reminded of the famous poem “The Second Coming” by William Butler Yeats, which is admittedly over-dramatic and starts with the ominous and portentous:

Turning and Turning in the widening gyre
The falcon cannot hear the falconer;
Things fall apart; the centre cannot hold;
Mere anarchy is loosed upon the world,

This poem is usually widely quoted by those of a left-of-centre bent when a new “disaster” occurs, such as the 2016 election of Donald Trump. But I am happy to co-opt it as the frame of reference for discussing the state of religious freedoms in 2019 in Australia. For it seems that we have strayed far from our Judeo-Christian heritage and foundation – it appears that the centre cannot hold.

The latest prominent religious freedom brouhaha is the unfolding Israel Folau saga. Folau is a world-class rugby player for both Australia and the New South Wales Waratahs. He is the guy you would pick first in the team, every time. He plays the beautiful game that most competent theologians agree is the game played in heaven and which Oscar Wilde observed was a game for thugs played by gentlemen.

Israel Folau is not just a great rugby player, but he is also a sincere Christian who regularly shares his faith on social media. On April 10, he posted a post that most are now familiar with. 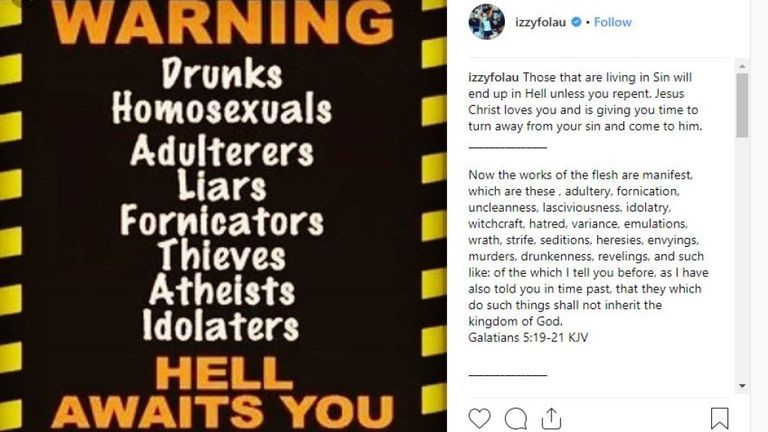 Much has been written about this post. When it was published, it caused an immediate media furore. News articles started appearing everywhere talking about Folau’s intolerant and bigoted post. Most pundits condemned the post as being discriminatory and focused only on the reference Israel made to homosexuals and hell.

What most failed to notice is that Israel posted a summary of 1 Corinthians 6:9-11. It was followed by the appeal of the gospel that “Jesus Christ loves you and is giving you time to turn away from your sin and come to him”. This is a message preached from thousands of pulpits every Sunday throughout Australia. But it has become clear that this is not acceptable for Israel Folau.

Folau’s employer the Australian Rugby Union was quick with a post of its own - “Rugby Australia is aware of a post made by Israel Folau on his Instagram account this afternoon. The content within the post is unacceptable. It does not represent the values of the sport and is disrespectful to members of the Rugby community. The Rugby Australia Integrity Unit has been engaged on the matter tonight.” Rugby Australia very quickly determined that Israel’s post constituted a high-level breach of its Code of Conduct and has announced its intention to terminate Israel’s $4M employment contract. Folau now faces a Tribunal hearing on Saturday, 4 May 2019 to determine whether he will be sacked for his religion.

The best lack all conviction, while the worst
Are full of passionate intensity.

Hasn’t this been true in the media coverage? His coach has said that he won’t select Folau even if he is cleared. Many players have stated (uneasy in the glare of the cameras) that they would be uncomfortable playing with him. Loud sections of the media have been persecuting him with an almost perverse enthusiasm and zeal. Liberal use of the words “bigot”, “homophobe” and many other pejorative epithets are the norm. Folau has been thrown to the wolves in the name of tolerance, diversity and equality. Passionate intensity indeed.

There have been a few voices of reason (Alan Jones in the Australian is one) and some early concerns expressed by legal experts on Rugby Australia’s approach. Some Christian leaders have been ambivalent with their nervous handwringing in the media about how Israel needs to show more “love”, but not recognising the fundamental issue at stake – he quoted the Bible.

As the day of Folau’s hearing has drawn closer, some sections of the media are resembling a Western-movie lynch mob waking up with a collective hangover after having egged each other on to arrest, try, convict and execute mob justice on a hapless victim only to see the judge walking into town. Hang on. You can’t fire someone for being a Christian, can you? You can’t ruin Folau’s career because he holds and promotes unfashionable ideas out of step with the cultural zeitgeist?

As Associate Professor Neil Foster of Newcastle Law School has said, it has become apparent that our society has adopted a new “sexual orthodoxy” and expressing disagreement is “heresy”. He is not misguided in using such religious language. Israel Folau’s crime of calling all people (including homosexuals) to repent is indeed heresy. There is indeed a new sexual orthodoxy. Its religious tenets are a uniform diversity, an intolerant strand of tolerance and a very exclusive and narrow form of exclusion. These principles are sacrosanct. What Folau committed was an act of heresy and now the lynch mob is out to get him.

However, this new religion completely ignores the law and Israel Folau’s fundamental freedoms, particularly his freedom of religion, which is still protected in Australia. Law always follows culture, thank God, and has not yet been dismantled by the new religion.

In short, Australian law does not allow you to fire someone because of their religion. It is in the law and it is black and white. All employees are protected by the Fair Work Act. Folau has a strong argument that his quoting of a bible verse and a call to repentance is the very heart of preaching the gospel and is the very heart of Christian freedom. Even Alan Jones, by no means a Christian, has pointed out that it is pretty hard to see how this is anything other than discipline against Folau for his Christianity. And the law says you can’t do that.

But what about Folau’s employment contract and a code of conduct? Surely, if Folau agrees not to post “offensive” content and is paid good money by an organization, he can’t go back on what he has agreed. Surely his freedom of religion only relates to his freedom to believe things in his head and practice them at home, not to express them publicly? Firstly, we don’t know exactly what Folau agreed to, and it appears that he has made no social media promises. Secondly, Folau is quoting from the Bible in his personal social media. Under Article 18 of the UN International Charter of Civil and Political Rights (to which Australia is a signatory) this freedom of religion includes the right “to adopt a religion or belief of his choice, and freedom, either individually or in community with others and in public or private, to manifest his religion or belief in worship, observance, practice and teaching”.

Israel cannot be contractually bound not to manifest his religion in public or private. This is a fundamental freedom. It is protected in Australian law and in international law.

But what about Folau’s obligations as a public ambassador for rugby? Doesn’t Rugby Australia have a point when it says that Folau must affirm and preach its chosen values of tolerance and diversity in public and in private? Isn’t ARU able to make this a requirement of Folau, given his position as a role-model? As a leading human rights lawyer has pointed out to me in discussion about the Folau saga, Rugby Australia’s argument on this point will be difficult. For ARU to be successful, it must prove that the restriction of Folau’s religious rights is one of the “inherent requirements” of Folau’s employee position as an Australian-contracted rugby union player. As the Pacific Islander Queensland Reds rugby player Taniela Tupou stated so succinctly on Facebook “religion had got nothing to do with rugby anyways”. A succinct summary of a key legal argument from the man known as Tongan Thor.

There are more legal arguments that can be made on Folau’s rights to religious freedom, but the take home message is this – Israel does have rights and he is in a strong position going into his Tribunal hearing.

As Israel Folau contemplates a Tribunal Hearing tomorrow, we turn back to the conclusion of Yeats’ bleak poem:

And what rough beast, its hour come at last,
Slouches towards Bethlehem to be born.

For Israel Folau, the rough beast that he faces is the potential for uncertain justice at the hands of the ARU Disciplinary Tribunal. The new religion of sexual orthodoxy slouches into Sydney with a gaze blank and pitiless as the sun and Folau is in its sights. There is incredible pressure on this three-person Tribunal in a high-profile case that is a troublesome brew of a hasty and censorious ARU, a baying pack of media, fundamental religious freedoms, social justice warrior corporate sponsors, a lot of money at stake and a public waking from its slumber on religious freedom issues. We pray that justice may be blind and that Christian freedoms may be upheld.

Folau’s case is your case and my case. For every Folau, there are everyday average Australian Christians who are in workplaces where they could face the same fate – termination for their personal religious beliefs. No one hears about those cases. So, we need to pray that there is true justice in Israel’s case and that his religious freedom is protected so that the freedom of all Christians is protected.

Whatever rough beast is threatened to be unleashed against Israel Folau, Christians know that the Lion of Judah is on their side and that the God of heaven is sovereign and we pray that his kingdom comes and his will is done on earth as it is in heaven. And with that confidence, we must not be silent. Sometimes the best do lack all conviction in the words of Yeats. But in the face of increasing pressure, Christians must stand sincerely and confidently speak the gospel with the same intensity that others are seeking to contain it. And continue to pray for all of us at Human Rights Law Alliance.

Australian Cases - Freedom of Religion. Religious Freedom is increasingly under threat in Australia with Christians and other faiths facing increasing hostil...

The Good, The Bad, The Ugly – Does a Religious Discrimination Bill help Christians?

Two thousand and nineteen has been a fertile year for the profile of religious freedom in the public consciousness of Australia. In a manner that has not bee...